Below is a listing of the significant works completed and currently in progress by the VENTURELLA STUDIO. If you would like further information about any of the works listed below, feel free to email us: info@venturellastudio.com

The VENTURELLA STUDIO is the Conservation Studio of choice for the Morse Museum’s extensive collection of Tiffany glass.

The Columbian Exposition of Chicago, 1893:

Chapel of the Association for the Relief of Respectable Aged and Indigent Females:

“The Four Seasons” exhibited at the Exposition Universalle in Paris and Grafton Galleries in London, 1900. Later used in the loggia of Laurelton Hall, Oyster Bay, NY:

Additional restored windows and glass objects from the Morse collection:

The Metropolitan Museum of Art, The Cloisters, New York, NY

Five verre eglomisé panels by Jean Dupas for the Grande Salon of the ocean liner “Normandie” 1935. One panel was broken into five sections. Conservation treatment included edge gluing, the duplicating of missing paint, and metal leafing to match original artwork. Backing fabric to all panels was re-attached. Panels were cleaned on the interior and exterior surfaces.

These three windows, each 234” h. x 78” w., are single lancet multi-layered windows. Each was removed, completely releaded, and reinstalled. Each window had problems unique to each one.

These three windows were removed, completely releaded, and reinstalled.

An ensemble of 4’ diameter windows with life sized allegorical figures representing aspects of life in Pennsylvania. 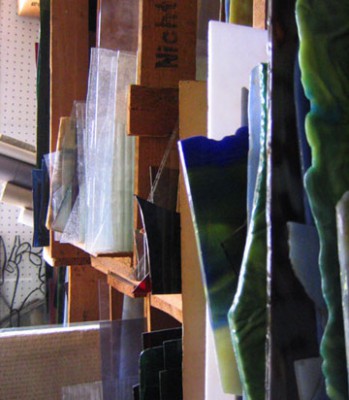