Born in Namur, Belgium Benoît Gilsoul completed his primary studies and Greek-Latin humanities, then entered the Académie Royale des Beaux Arts, the most prestigious Belgian art college from which he graduated in 1938. During the six years at the Académie, Gilsoul acquired a solid artistic training. By 1933, he had already founded the secessionist art group: “L’Esquisse,” an influential group of young artists in Belgium that developed into the group “Salon National des Jeunes Artistes”. In 1935, while still at the Académie, he collaborated in the design for the entrée Reine Astrid and the pavillon de la vie Catholique at the World’s Fair in Brussels, Belgium. During that same year, he also undertook an extensive study tour with Nicolas de Stael, a close friend and fellow student. Upon graduation from the Académie, Gilsoul traveled extensively in Italy, France and Spain painting and drawing continuously.

In 1958, he became président of the Association des Artistes Belges where he remained honorary president until his death in 2000. In 1960, he was commissioned to execute the murals in the Salle de Réception for the Belgian Line in Antwerp. Also in 1960, the Belgian government sent him to the United States on a grant to study the artists’ situation in that country. Gilsoul quickly fell in love with America and upon his return to Belgium decided to resettle in America with his family and became an American citizen in 1967. In 1960, he began to design and work extensively in the field of stained glass while continuing his work in painting, print making, tapestry, and sculpture. He operated his own studio in New York where he created, designed and executed his work. Gilsoul is regarded today as one of the foremost artists in the field of Stained Glass.

Thomas Venturella had the honor and pleasure of working with this renowned artist from 1969 through the 1980’s. He fabricated many of Gilsoul’s windows including those for St. John’s Capuchin Monastery in New York City, “Christ Over the City”. Venturella states that “Benoît Gilsoul was a major force in the field of stained glass and one of the best colorists this medium has known.”

To learn more of this incredible artist and his works, please visit www.benoitgilsoul.com 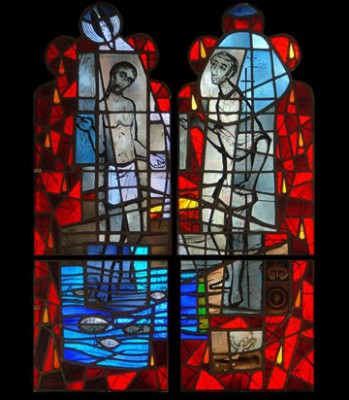