Title
The Arrival of the Halve Maen, 1609
Location
New-York Historical Society
Creator
Frank J. Ready, Gorham Manufacturing Co.
Creation Date
1908
Restoration Date
2010
URL
http://www.nyhistory.org/
URL
http://www.sdametal.com/
Description
This eleven panel window, approximately 14’ x 7’ was designed by Frank J. Ready for the Gorham Manufacturing Co. The Arms of the Netherlands, the country for whom he was sailing, can be seen in the border of the central upper section. On either side, fruits and flowers represent autumn and the land of plenty. In the upper corners are the arms of Old and New Amsterdam. The drops of oak leaves symbolize Hudson’s strength and integrity. In the lower left-hand corner is the insignia of the Dutch East India Company, which financed the voyage. The lower border contains the Seal of the Daughters of Holland Dames who gifted the window, and in the lower right hand corner are the arms of New Netherlands.
In 1908 the wall in which it resides was an exterior wall, but with a building addition in the 1930’s it became an interior wall and a large light box artificially lighted the window from that time on.

Over the years significant amounts of dirt collected between the plates darkening the entire window. Tie wires failed and panels were released from their support bars.

The window was removed to the Studio for restoration. Plates were removed, collected dirt vacuumed out, glass cleaned and broken glass repaired with Hxtal NYL-1. Areas with failing leads within the design were replaced with leads matching the originals in profile and lead content. New perimeter leads for all eleven panels were replaced as well.

Due to the combination of ferrous and non-ferrous metals used in the original frame, serious metal deterioration occurred rendering this frame unstable. The failing frame was reproduced is steel faced with wood by Studio del Arte of Brooklyn, NY. This allowed for a secure installation to hold the weight of these heavy panels. A new lighting system was designed and installed to replace outdated and burned out florescent light bulbs. 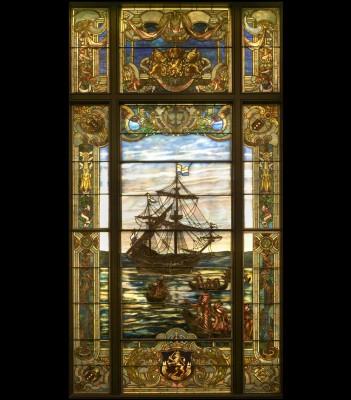